Since 1993, Private education.
1996/2000, Lecturer in Drums at A.N.D.J. Naples.
1999/01, “Rainbow Project” (Music saves the Future) in the high schools of the so called districts at “risk” of Naples.
2000/01, Laboratory of “Percussion by Recycling” in the juvenile prison Nisida (Na).
2004, Workshop / Performance at the juvenile prison Beccaria (Mi).
Since 2005, Private intensive workshops.
2006/2011, “Percussion by Recycling” workshops in primary and secondary schools in Ghemme, Romagnano Sesia, Borgomanero (No).
since 2010, Workshops / performances on “Creative Recycling” for children with dancer and choreographer Andrea Longhi in primary and
secondary schools in Novara, Milan, Gravellona.
2011/12, Lecturer in Drums, at Ass.cult . “Borgomusica” Borgomanero (No). 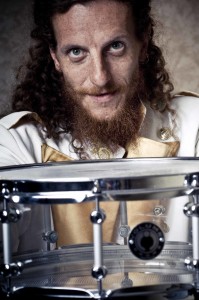